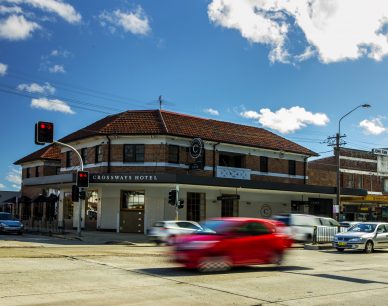 The Strathfield South Shopping Centre is located on the ‘crossways’ of Liverpool Road and Liverpool Road (Hume Hwy). Liverpool Road was first built in 1814 joining Sydney to Liverpool by road. This road predates most residential development in Strathfield and in early times featured small half-way hotels for travellers. By the late 19th century a small shopping area developed featuring a post office, general stores and White’s timber yards. Though the timber yard is long gone, older locals still refer to this centre as ‘White’s Corner’. Many buildings including the hotel date back to the 1920s.

Strathfield South Shopping Centre is very accessible being located directly on the Hume Highway on the corner of Liverpool and Homebush Rd. Sharing the intersection is Strathfield South Primary School and a Council Car Park for local shoppers.

This centre has a variety of businesses including a local hotel, post office, hairdressers, restaurants, as well as financial, legal, and a local auto electrical business.