Emergency Ready Week
Disasters are becoming more frequent. It has never been more important to get prepared. Click through for more information on how you can better prepare your family for emergencies this Emergency Ready Week.
Read more
Council
Participate
Work
Develop
Live
Play
Home    Live    Cooks River

The Cooks River is located in the inner south west of Sydney. It runs through some of the most heavily urbanised and industrialised areas in Australia. The Cooks River begins as a small watercourse near Graf Park in Bankstown and flows 23km in a generally easterly direction to enter Botany Bay just south of Sydney’s Kingsford Smith Airport.  The Cooks River is located in the south of Strathfield Council and runs through Belfield, Strathfield South and Strathfield.  A large portion of the River has parkland as its foreshore and a walking/cycling path known as the ‘Bay to Bay’ path.

53% of Strathfield Local Government Area is located in the Cooks River catchment.

The river’s catchment area covers about 100km2 across 9 local council areas.  Care and control of the river is a complicated issue, where responsibility is shared between local Councils, the community and the State Government through agencies such as:

Over recent years, the condition of the river and its foreshores has seen some improvement, due in large part to the efforts of these stakeholders and our local community, however it remains a heavily polluted river with much more to be done.

Strathfield Council works with state agencies, other councils and the community to improve the condition of the river system. 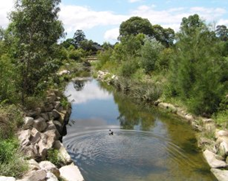 Strathfield Council first began to address problems in the Freshwater Park area with a major bank rehabilitation project, carried out in 2001 – 2002, to a 200m section of the Cooks River, just upstream from Hedges Avenue, which runs adjacent to numerous homes and through the Strathfield Private Golf Course. The creek is the only naturalised section of the Cooks River within the Strathfield Council area.

Since 2002, Council has undertaken a further two projects to stabilise the riverbanks between Hedges Avenue and Centenary Drive, Strathfield.

In the long-term, the riverbank restoration project aims to set a benchmark for waterway restoration that is self-sustaining, rich in biodiversity and demonstrates the efficient use of open space in a highly urban area.

Several engineering and landscaping measures were adopted throughout each stage to help control the erosion that was destabilising the riverbanks and bed of the Cooks River within the Strathfield Golf Club.

To date the site has improved dramatically with over 55 000 local indigenous plants now preventing erosion even under the recent heavy rain events. The vegetation is also a valuable seed source for other vegetation projects.

For more information about Strathfield Council’s on-going commitment to the restoration of the Cooks River at Freshwater Park, please contact Council on 9748 9999.

A bioretention swale, designed in accordance with Water Sensitive Urban Design (WSUD) principles was constructed within Chain of Ponds Reserve at Cave Road, Strathfield.  The WSUD involved the construction of a bioretention swale to provide a water pollution buffer for local storm events.

The Cave Road system operates in periods of rainfall by diverting local stormwater flows from the nearby carpark and road to kerbside guttering and underground pipes and then into the swale. The swale component provides pretreatment of the stormwater to remove coarse to medium sediments. The water flows through native grasses which uptake pollutants as well as filtering through a modified soil structure.

Any excess water enters an overflow pit at the end of the swale which is diverted into Council’s stormwater system prior to discharging the water, in a cleaner state, into the Cooks River.

The Cooks River Alliance is made up of four councils in the Cooks River catchment (Canterbury-Bankstown, Inner West, Strathfield and Bayside).

The Cooks River Alliance aims to address the complex environmental problems of the Cooks River.  The Alliance commenced in July 2011 and is hosted by Canterbury-Bankstown Council.

The Alliance has its own website  where you can learn more about the Alliance and sign up for their quarterly e-newsletter. You can also read their management plan and annual report here.

Bay to Bay Cycle and Walkway

The Bay to Bay Cycleway is a 23 kilometre track running from Settlers Park in Ryde to Botany Bay. Much of the track runs aside the historic Cooks River. You can learn more about it here.