Emergency Ready Week
Disasters are becoming more frequent. It has never been more important to get prepared. Click through for more information on how you can better prepare your family for emergencies this Emergency Ready Week.
Read more
Council
Participate
Work
Develop
Live
Play
Home    Live    Biodiversity

Biodiversity is defined as the variety of all life forms; the different plants, animals and microorganisms, their genes and the ecosystems of which they are a part. The conservation of biodiversity is one of the key principles of sustainability and Councils are required by the NSW Office of Environment, Energy and Science to manage, protect and conserve local biodiversity.

There are a number of small pockets of remnant vegetation throughout the Strathfield Local Government Area, some of which are listed as Endangered Ecological Communities under the NSW Biodiversity Conservation Act 2016. These endangered ecological communities include Castlereagh Ironbark Forest, Coastal Saltmarsh and Swamp Oak Floodplain Forest. The fragmentation of these natural areas leaves them particularly vulnerable, making their management an important priority for Council.

A number of endangered species are found in Strathfield including the Green and Golden bell-frog (Litoria aurea) and the Downy Wattle (Acacia pubescens). Mason Park Wetlands in Homebush also attracts migratory Wader birds from the Northern Hemisphere through Spring and Summer each year.

Council aims to enhance biodiversity across the municipality through forming partnerships with the State and Commonwealth Governments, catchment management groups, bushcare groups, and the local community. For more information on these programs, or conserving biodiversity and native wildlife, please see our Biodiversity Conservation Strategy and Action Plan 2020-2030 attached at the bottom of this page, or visit:

Creating a bird friendly backyard is one way to help to contribute to biodiversity conservation in our community. Birds in Backyards is a research, education and conservation program focusing on birds and the urban environment and was developed by the Australian Museum and Birds Australia.

The Birds in Backyards website provides information about identifying birds, participating in surveys and research, creating bird-friendly spaces in your backyard and about upcoming events such as talks, study programs, presentations, open days and tours.

A key finding of the study found that Mason Park Wetlands and its surrounding vegetation is the most species-rich reserve within the Strathfield area. This result was largely due to the presence of migratory shorebirds that arrive during spring and summer.

The Fauna of Strathfield Council LGA 2

The Green and Golden Bell Frog is listed as an endangered species. Green and Golden Bell Frogs were once considered common, widespread and abundant along the eastern Australian coastline from northern New South Wales to north-eastern Victoria. However, since the 1960s this iconic species has gone from being one of the most commonly encountered frogs to one of the most threatened.

There are 8 key populations in the Sydney region. The suburb of Greenacre, located within the Strathfield and Bankstown local government areas, is known to support one of these key populations.

Body patterns vary greatly with some individuals being a bright pea green with very little gold marking, while others can be a dull coppery-brown colour. Some individuals may darken to almost black.The underbelly of the Green and Golden Bell Frog is usually creamy white in colour and granular in texture.

Whilst habitat for the Greenacre Key Population of Green and Golden Bell Frogs has dwindled due to extensive residential and industrial development, the population has survived by utilising local features including constructed ponds, drainage depressions, areas of native and introduced grasses, rock/brick piles and logs. The frogs utilise these features at different times of the year for breeding, foraging, shelter, moving or for protection over winter.

Identified threats to the Greenacre Key Population of Green and Golden Bell Frogs include:

How can you help?

How to report sightings to Council

To report sightings of Green and Golden Bell Frogs in the Strathfield local government area, please contact Council on 9748 9999 or email: council@strathfield.nsw.gov.au. Your sightings will contribute to the conservation of this endangered species.

To assist Council, where possible, please address the following questions in your report:

Residents may have seen Birdlife Australia volunteers conducting monthly surveys of all the birds at Mason Park Wetland on Saturday mornings from the path that runs between Powells Creek and the wetland. The data is collected as part of a larger project that monitors the shorebirds of the Parramatta River, its bays, wetlands and tributaries.

A short documentary, Mason Park: Turning the tide for shorebirds, follows these surveys, telling the history of the wetland and the efforts of volunteers and Strathfield Council to restore Mason Park Wetland to its former status as one of the most important habitats in all of NSW for birds.

The documentary was created by two birdwatchers, Gerry Duane and Teresa Russell, who have been counting the types and numbers of birds at Mason Park Wetland for almost three years. Gerry has been birdwatching at Mason Park Wetland for around 36 years. It used to be a hotspot for bird enthusiasts who wanted to see a wide variety of Australian waders and a number of intercontinental migratory shorebirds that fly to breed in Japan, China and Korea, as well as Alaska and Russia during the northern summer. Over the last 15 years, a number of global and local factors have combined to make the wetland unattractive to these important birds, some of which fly non-stop over almost 9,000km in just seven days.

Teresa and Gerry joined other volunteers who participated in a series of working bees late last year, helping Strathfield Council remove thousands of juvenile mangroves from the central and northern parts of the wetland, restoring the area to more suitable habitat for feeding and roosting shorebirds.

The pair have also launched a website called Friends of Mason Park Wetland and plan to run monthly bird identification tours for people interested in finding out more about this little-known but vitally important urban wetland in our area. 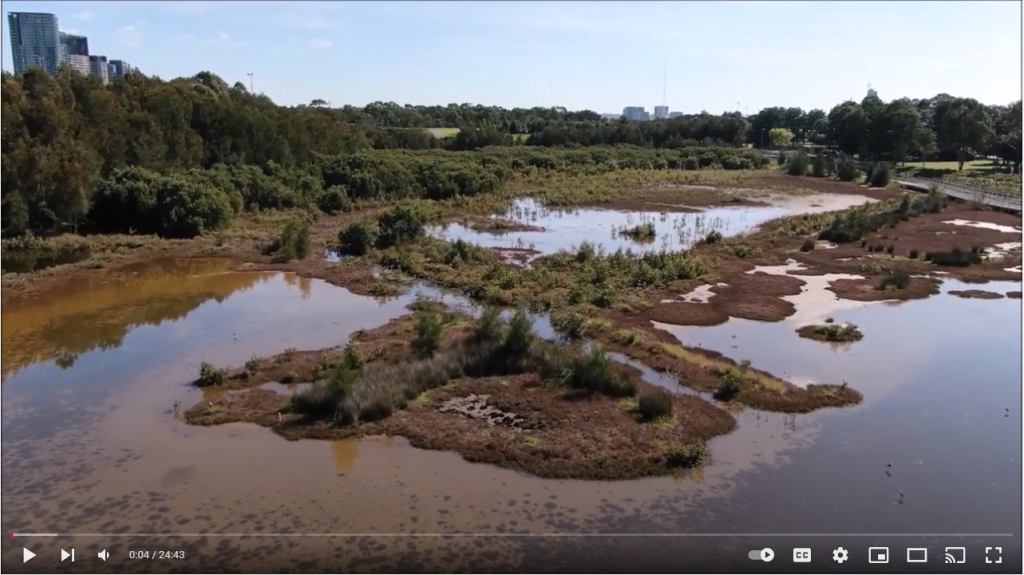