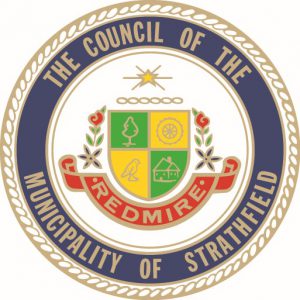 The Mayoral Chain features the names of all Mayors since 1885, when Council was first established.

The design of the crest is a shield, which is quartered, each representing a characteristic of Strathfield Municipality; a tree signifying Strathfield’s street trees; a bird representing the birds which are attracted by the many trees in Strathfield; a cogged wheel indicating the manufacturing activities in the Municipality; and a house indicating that Strathfield is primarily residential. Beneath the shield is the word ‘Redmire’, the original name of the Strathfield in its original spelling (The spelling of Redmire was later changed to Redmyre). The foliage on either side of the shield is a reference to the gardens of the Municipality.

The Strathfield Council Corporate Logo was adopted in September 2005. The logo appears on all corporate items including council stationery, website and signage.

The logo features a ‘ribbon’ which signifies the unity and celebration which cuts across all ages, languages and cultures. The logo with its forward moving motion represents future direction and a sense of dynamism. The design is a bold eye-catching corporate logo that reflects a stronger, more vibrant Council and community.